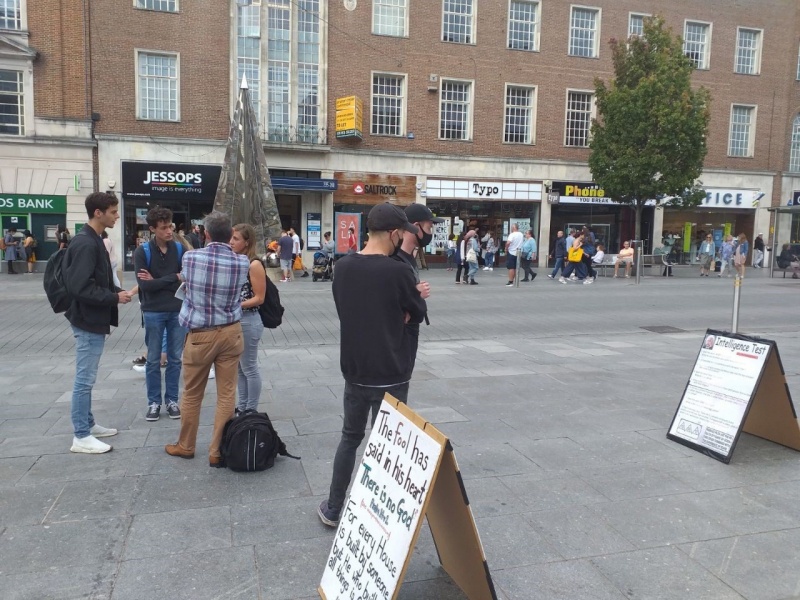 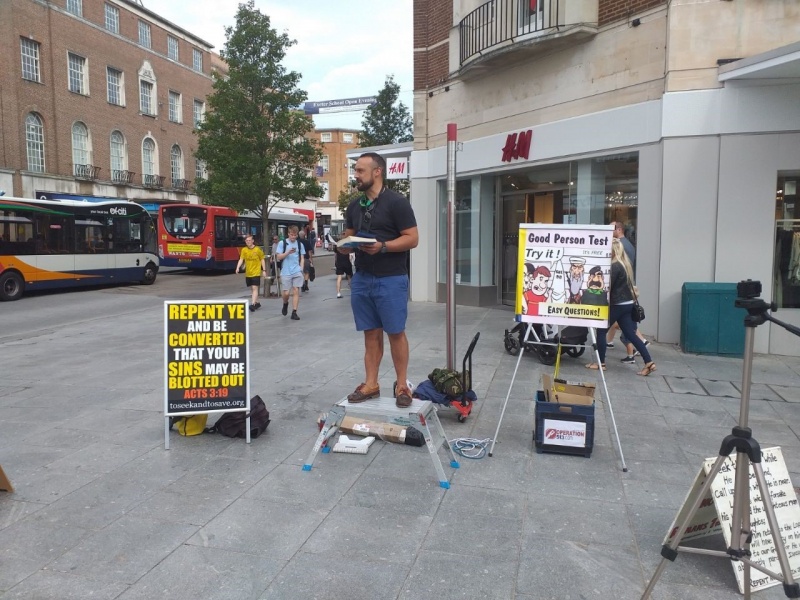 On Wednesday 16th I traveled down to Newquay with my Auntie, friend and her son for them to visit Newquay Zoo while I met with Josh and three others from his Church to do outreach from 12.30-2.30pm. It was great to see Josh again and hear about all the feedback he has been getting since the LGBT Cornwall Pride comments hit the media in a big way. It was tangibly  the signs and the tracts offered to them, and quite hard work to get anyone to take a tract or stop to chat. There were however some memorable conversations, with one man taking a million pound note tract, then coming back moments later asking if he could have a few more!

One especially good chat was with 3 lads from Cardiff University that had traveled down to Newquay to surf for a few days. They were interested in what the intelligence test questions were all about, which led to a really good conversation for about 15 minutes with them. They listened intently and apparently had not thought too much about what may happen to them after they died, but the Law was used to show them their desperate need for a Saviour. They were very enthused at the end and understood why they needed to be saved from hell, and why Jesus was the only person who could save them, and they gratefully took some gospel tracts and gave firm, positive handshakes and said they needed to think about this today.

I also managed to talk to a lady that stopped to read the sign who happened to be an NHS Nurse with her elderly parents and her Daughter who were out for the day, and we had a good conversation and they took some tracts and information about where Josh's Church Newquay Baptist was based. While this was going on, Josh and another member of his Church had been having a long conversation with man for an hour that had been against Josh and pro LGBT movement posting comments on Facebook, but later that day Josh said had reposted to say that his 'unfair perception of Josh had changed, and hopefully Josh's of him too, that had been spun and fueled by the media.' Josh had lots of people walk past refusing tracts as they said they knew who Josh was and therefore what he stood for, and so was really encouraging at least this man heard the truth of the gospel and what we stood for.

While packing up and loading the car, a couple walked past in the car park, spotted the sign in the car boot and read it, asking questions about what it was. It turned out they too were Christians that lived in Bath, which led to a good conversation about Evangelism and what we had been out doing that day, and they took some tracts and websites to look at.

Our team also traveled to Exeter on Saturday, with Simon, Laurie and me hoping to meet up with Steven the Pastor we had met in Plymouth and a couple of others he had been in contact with called Ron and Harry. The City Centre was very busy again, and as we were setting up the signs a young man had stopped to look at the signs. It turned out this man was 20 and called Damian, he said he was currently homeless, being forced to move down to Exeter with his Dad after a family break up, he had not seen his Mum in over 5 years and fairly recently had run away from Dads and was living in a tent. He wanted to do the good person test, and we had a really good chat and were able to listen to his sad and difficult story. We offered to get him something to eat at the end of the outreach but he never returned, but did take a Bible and some tracts to read.

We all prayed and was good to have 6 of us there that day, but it felt a hard slog, with many people wearing masks walking past and refusing to acknowledge us or take tracts. Laurie and Steven long chat with two 18 year olds called Jack who was an Atheist and Ben who was an Agnostic for quite a long time, as well as two new University theology students and a 65 year old Atheist for around 10 minutes.

Later I preached on Boris Johnson's command to us all about 'Hands, Face, Space' that is being given out through the media at present. I preached on James 4- 'Wash your hands you sinners and purify your hearts... for your sins have separated you from God. Adam and Eve tried to distance them selves from God and cover themselves up, but God had to cover their sin, and why being religious or good works cant help us, but God must intervene in our lives. There were 3 unusual men that had stopped to listen that were sitting on a bench nearby- they were dressed as Women but were visibly men, and listened for a while before walking off.

Laurie and Ron also spoke to 4 teenagers dressed in make up and gothic clothes who had stopped to listen. They had quite a lot of hostility and anger, swearing, but underneath some searching questions, they were feeling judged by some of the scriptures on the boards, so in a way were already wrestling with the bad news (1 Corinthians 6 v 9-11), and Ron made sure they all understood they needed to be washed spiritually in order to begin to approach a Holy God, and spoke of the parable of the prodigal Son and the amazing Father with his hands outstretched waiting for the Son to return home.

Ron also spoke with a couple from Dorset took a tract, spoke to a Hindu man and his son how the God at the top of the mountain (to which all roads are said to lead) is not the God we know who is a loving heavenly father unlike many of the Hindu Gods and whose Son's life, death and resurrection are verifiable historic events (Unlike Mohammed's cave or the Buddha's Bo tree)

Near the end of outreach while Steven was preaching and we were starting to pack up, 2 Police officers came along and started asking questions about our 1 Corinthians 6 v 9-11 sign. This is the whole verse,

'Do you not know that the unrighteous will not inherit the kingdom of God? Do not be deceived. Neither fornicators, nor idolaters, nor adulterers, nor homosexuals, nor sodomites, nor thieves, nor covetous, nor drunkards, nor revilers, nor extortioners will inherit the kingdom of God.  And such were fsome of you. But you were washed, but you were sanctified, but you were justified in the name of the Lord Jesus and by the Spirit of our God.

We said we were talking about all sins, and that Biblically marriage was between a man and a Woman and sex only right in this context. However the Police were picking out the bit that mentions 'Homosexuality' and trying to say why did we not have more loving signs that said everyone can go to Heaven?! Simon and I had a good chat with them for over 10 minutes, and they were trying to denounce what we were doing and one made a radio call to her Sergeant to see if the sign counted as hate speech. We said we were not picking out the verse about Homosexuality, but why were they? I said that if Drunkards were forgiven and stopped drinking, how much easier would their job be as Police officers and how much money the Police force spent on  this on Saturday nights?

They did not want to comment, but it was obvious they were trying to use their liberal opinions and not the law to shut us down- no one had complained, they just said most people are pro Homosexuality today, which we said was not true, and that why did they not ask Muslims opinions about Homosexuality as the Koran mentions this a lot, but again they did not like this. One of them said we were trying to pick and choose which verses we were following, as why did we wear mixed fibers today etc! He did not want to listen to the explanation about the OT and covenants for the Jews etc, but they eventually left but verified how intolerant the Police force has become and trying to shut people down that do not go along with their own views and values, while not breaking the law.

It was very sad they did not want to give us freedom of speech, and one man walked over and asked us what they had been saying. He was not a Christian but agreed we had a right to show this and not everyone is pro LGBT today.

Laurie and Harry a 4th year student that had come along with Steven had been speaking to a young man called Tom who said he was an agnostic. He had a lovely dog, was asking lots of questions but was an antagonistic agnostic, having been brought upo with one parent a Roman Catholic and one an Atheist, and now he said both parents were Atheist, and that it was wrong for parents to try and force their religion on their children but they should be able to choose what they believe themselves. We talked to him about his worldview having to borrow from the Christian one to make any sense, he took some tracts but was very skeptical and hostile.

It was a beautiful day, a bit windy blowing some of the signs down at times but a real encouragement to now have others in Exeter that are like minded and we can join up with and point to a good Church. Steven messaged me later that evening saying he had been called by young man called Edward after outreach asking questions for half an hour as to 'why does God do violence and allow suffering, why is the Bible not clear and have contradictions'. He asked about 'Matthew and the sermon on the mount vs Luke on a plain, and also don't many religions all worship the same God? Steven said he had a good chat with him and was great the young man felt convicted enough to call him from reading the details on the tract. We are planning to meet up again in a few weeks time and we prayed for the different conversations we had that day and hope we can stay for longer next time. 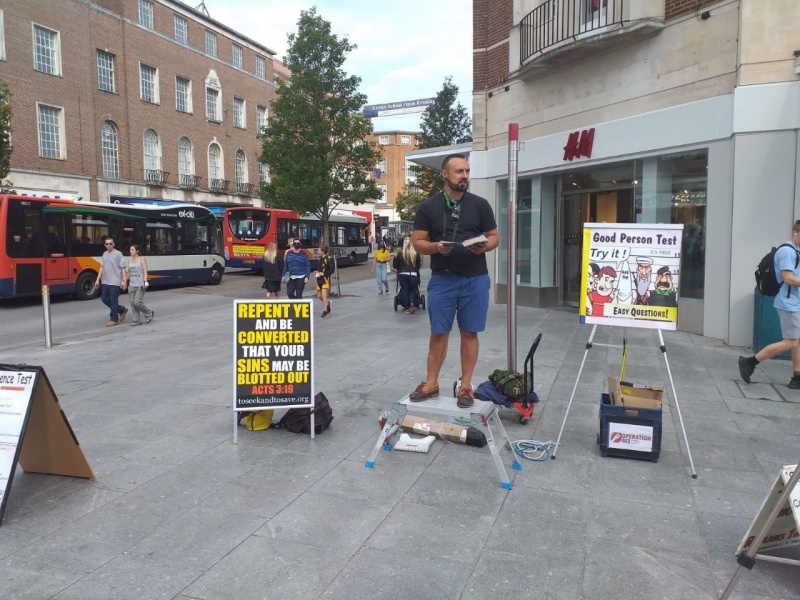 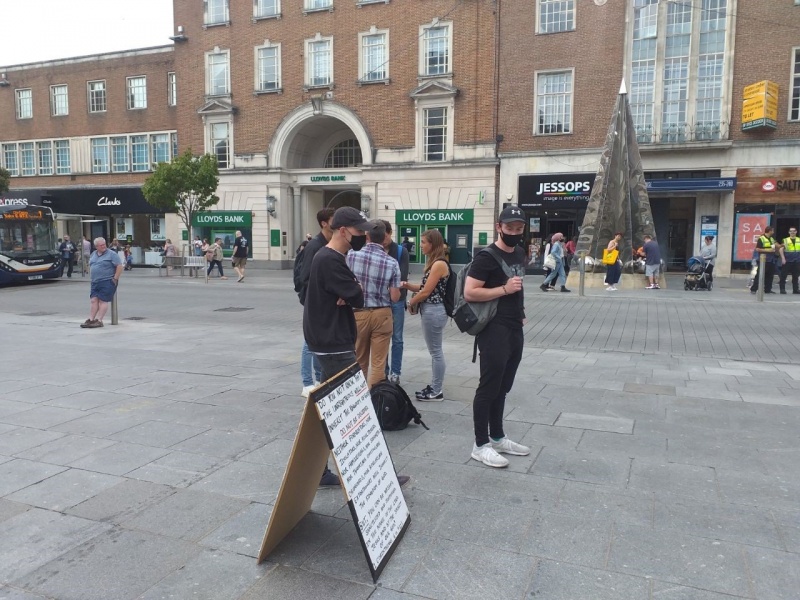 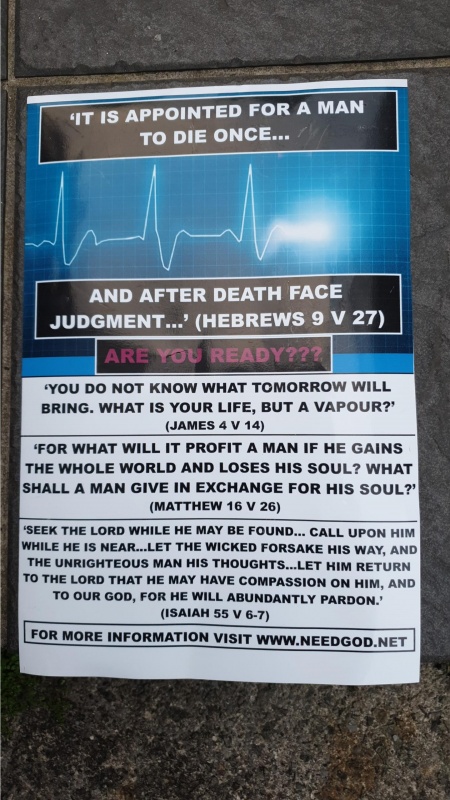