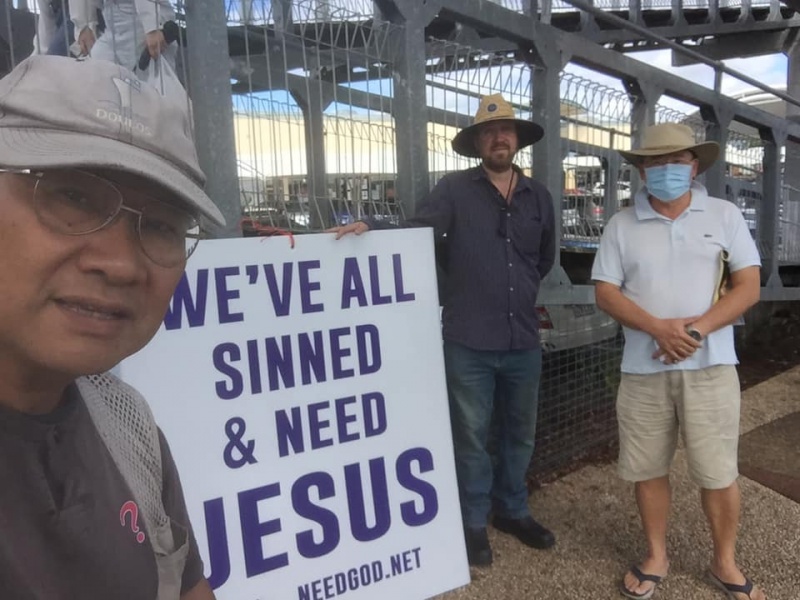 The weather turned superbly fine this afternoon as such Johnny and Hung stayed on the East side to do our street Evangelism. It was delightful to have Gary re-joining us today with his big signs to draw attention of passers-by . He himself had got an ultra-long conversation with a self-acclaimed apostolic Christian about the end time political climate that Australian is facing with the Middle Kingdom as our major opponent.

As usual, Sunnybank is a comparatively hard land of Gospel as such we faced a more than normal rejection rate throughout the ministry time. Anyway, thanks God that most of them were positive and receptive. Recap below were the 6 major divine encounters.

1) Jenny is from a Christian family though she herself has not yet formally received Christ despite she is attending church with her Christian mother. She is from Henan China which is a highly populated province with Christian. She showed care for me while I walked quickly with her across the foot bridge appearing a bit out of my breath. I pray that the simple but precious gospel message can strike her heart to cross over the last step of faith blocking her from receiving Christ as her Saviour. 河南家基督, 有去教會未信，可以接受

2) Then I approached an elderly man Mr Wong from Quandong China firstly in Mandarin and a bit later switching into Cantonese after knowing his home town. He was born in Quanzhou, then moved to Hong Kong and finally to Australia. He shared many common memory of Hongkong that helped to identify with each others. He has not yet committed on any religion as he thought they are all good but have short coming too. I stressed the message of the tract that we are ordinary people who are regarded good, but we are all imperfect. So all people good or bad need salvation as long as we have punishable sin. We are not perfect yet after we received Christ attending church as the redemptive grace of Jesus only converted our identity from sinner and or enemy of God to a blessed sinner with sin pardon by the grace of Jesus redemptive act as such regaining our sonship and heavenly citizenship to be with God. It is soonest possible for him to make this last very small step of faith to get himself into the realm of God before it is too late. He appeared receptive and responsive to my appeal. Just pray and leave all this to God. 王伯中國，廣東閱歴甚多，未信，欠最後一步縱有家人已信主

3) Then God led me to chat with another even older man Mr Tam from Jiangsu China. He was drawn by my young and energetic appearance and was amazed to find that I was only 10 years younger than him who is now 80 years old. It appeared that he needs and enjoys chatting with people apart from his own family. Like Mr Wong he spent time in Shenzhen, then Hong Kong and finally migrated to Australia. But because the lack of English , he could not stand the loneliness with little inter person networking here as such he returned to Hong Kong. He was summoned by his sons to come to mind his grandsons with a one year visa. He got caught up here to stay over the visa period because of pandemic. I pray and trust that the love of Christ will melt his heart to have faith in relationship with families as well as with God. 談先生江穌，深圳香港，回流探兒孫友善願聼

4) Chelsy is a friendly Kiwi girl. She stopped surfing on her iPhone and listened attentively to my full gospel sharing and appeared very receptive. Her heart seemed very opened and soften for the gospel. Pray for God's last step of faith to reap this new fruit in Christ.

5) I caught up with two Chinese young man who turned out to Mansfield students. They were in a hurry but still let me share the nutshell of gospel to them. They were amazed to find out I am the father of their teacher.

6) The last person I got in touch was yet another senior man Me Wang from Quanzhou. He seemed to have no religion and felt strange to listen to the Gospel. I nevertheless stressed the need and urgency for him to miss no more chance of knowing and accepting Jesus as his Saviour and Lord of life. The bus came and he left with the tract in his hand. 王廣州無信仰 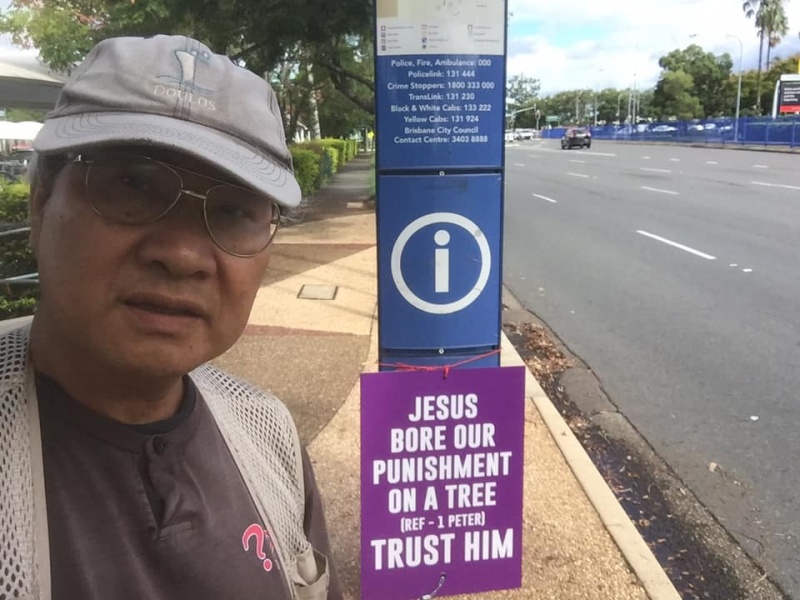 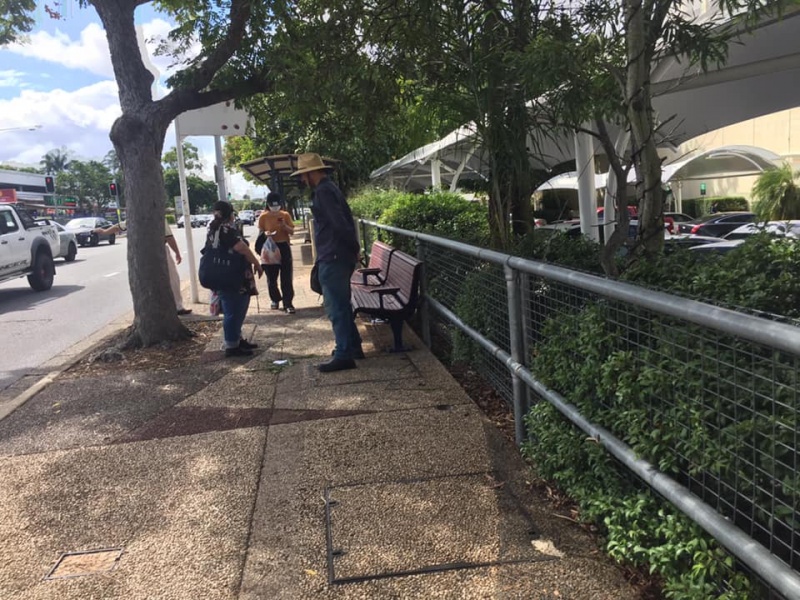 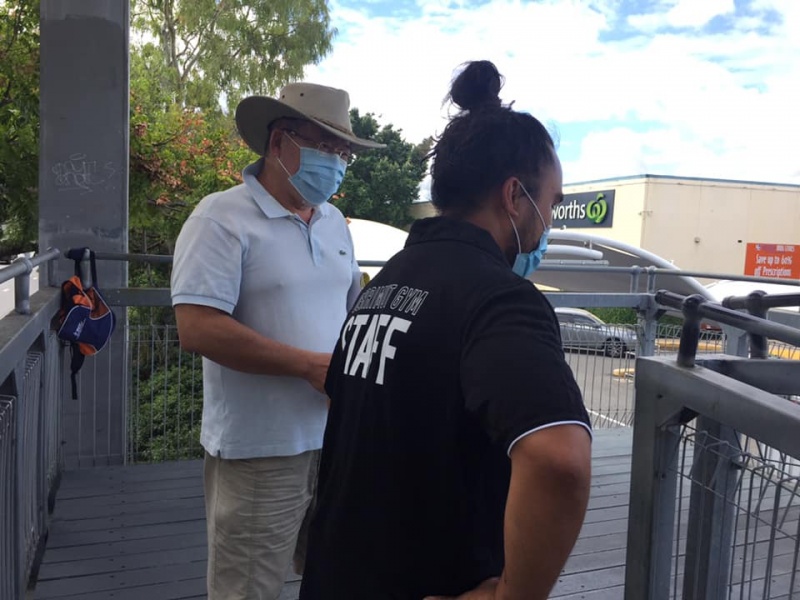 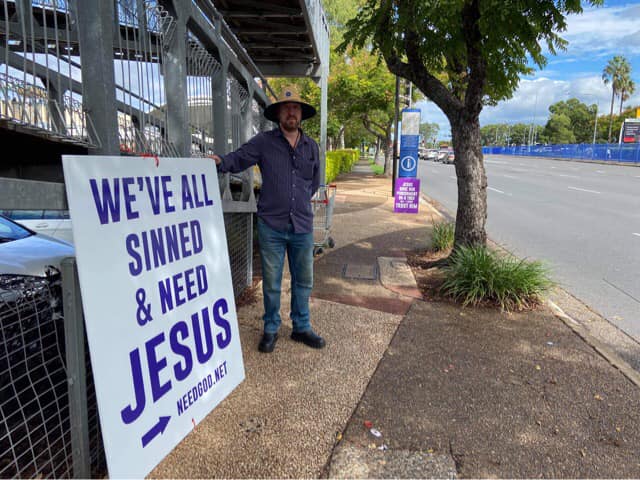 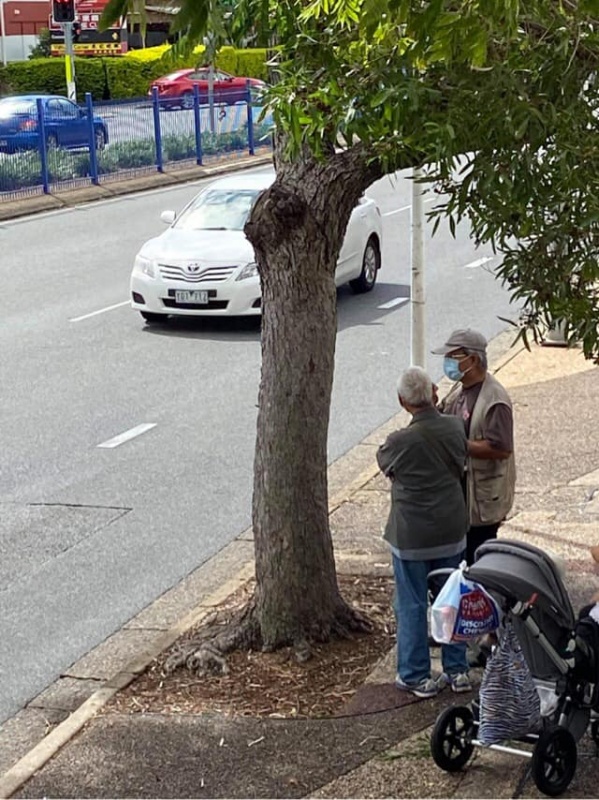 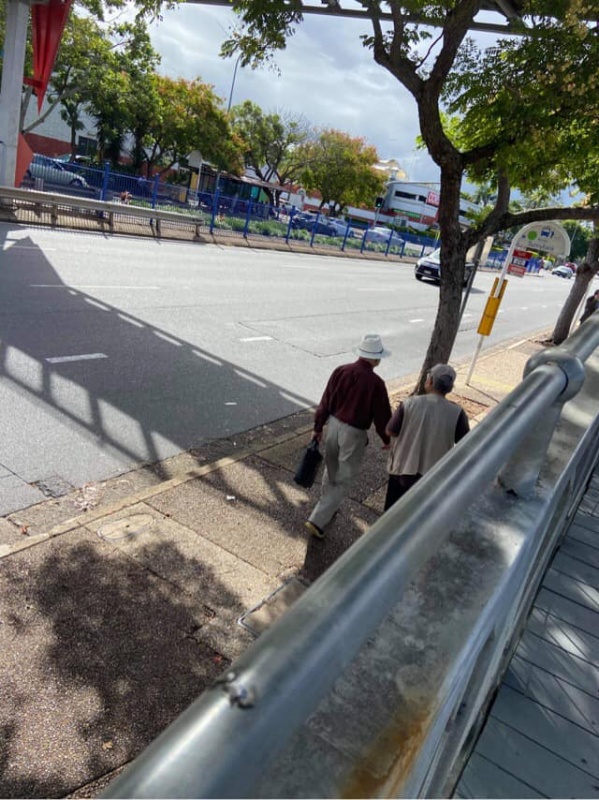 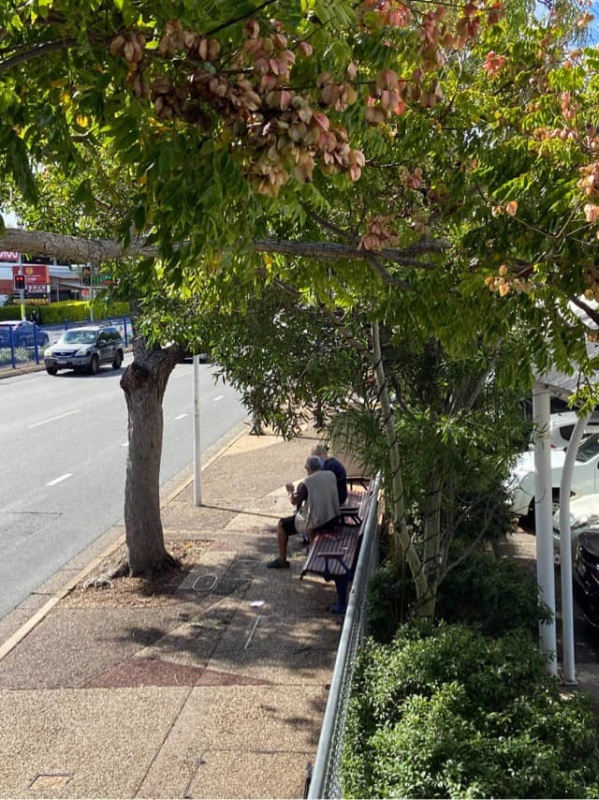 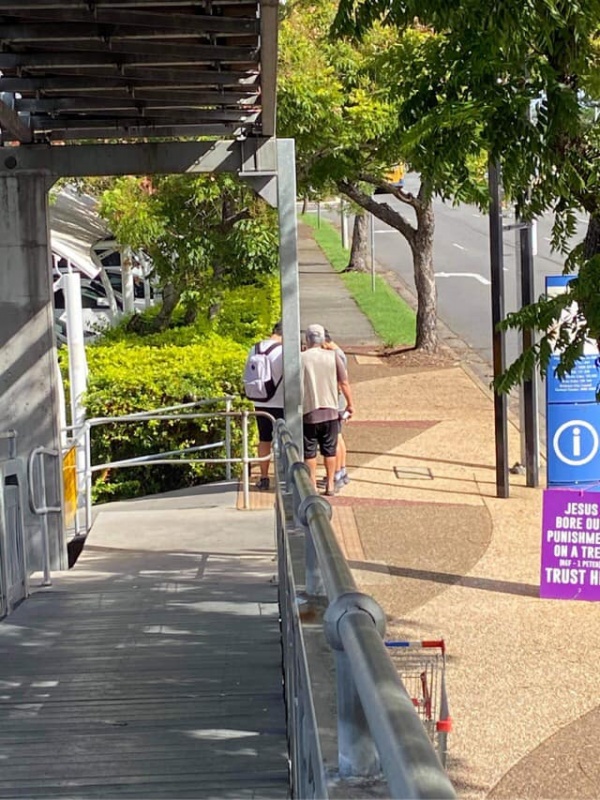 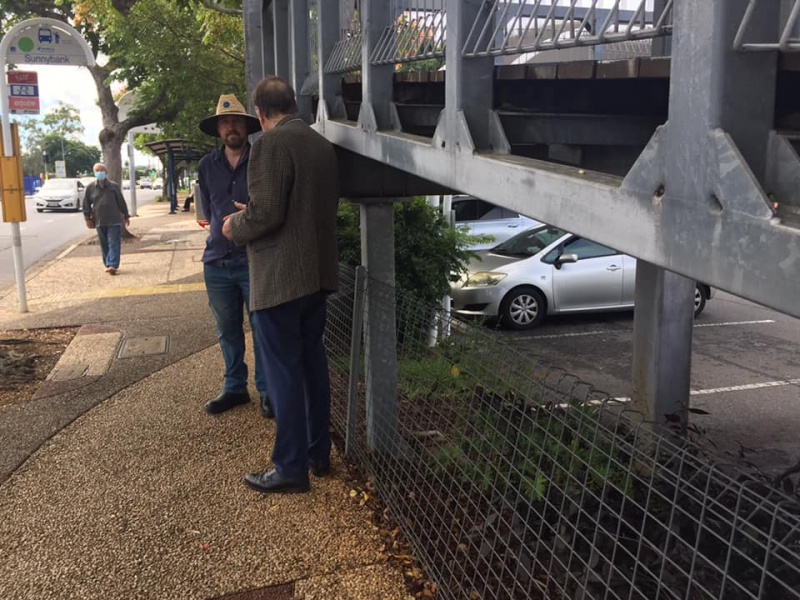 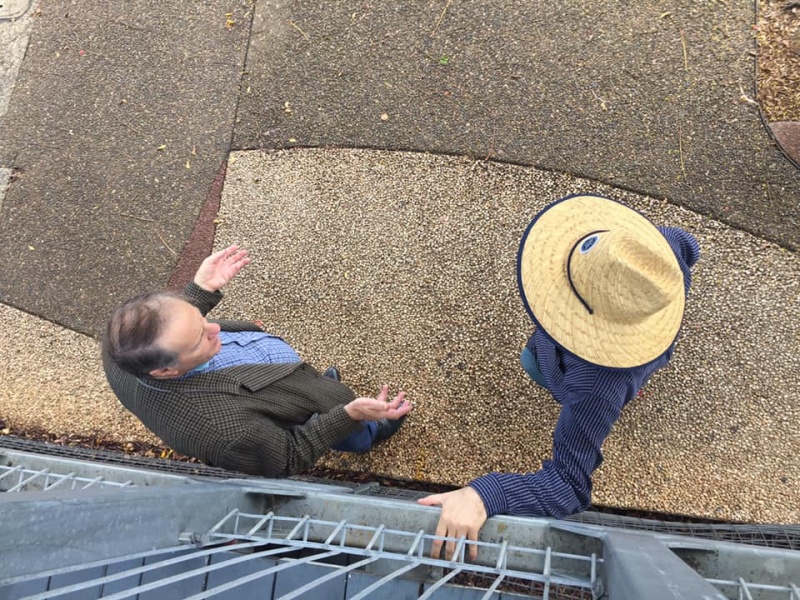 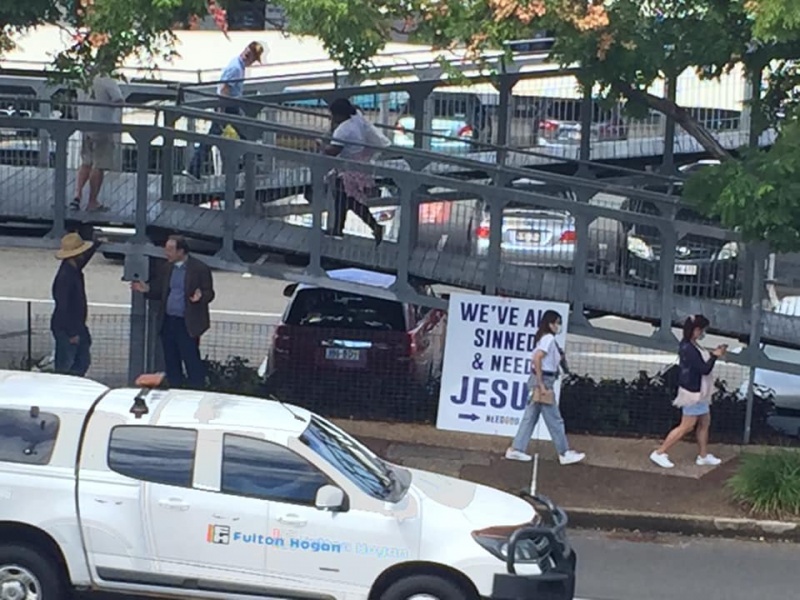 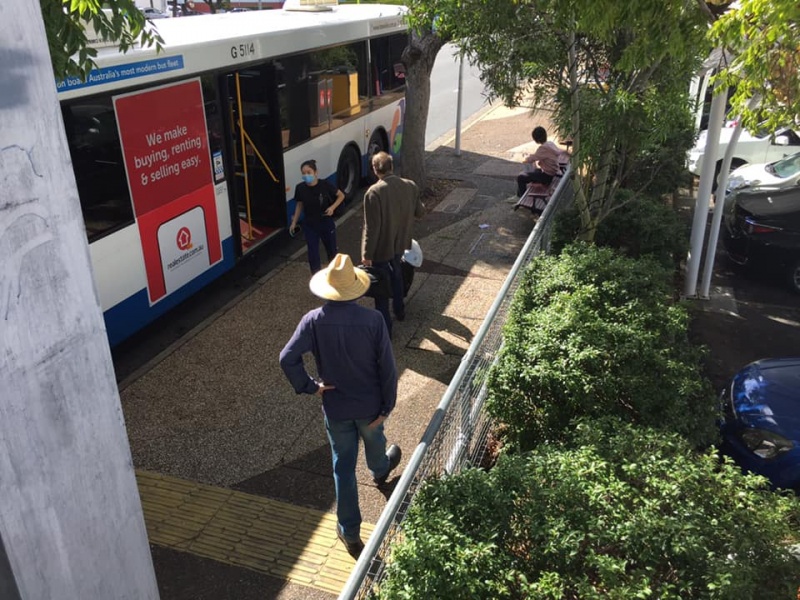 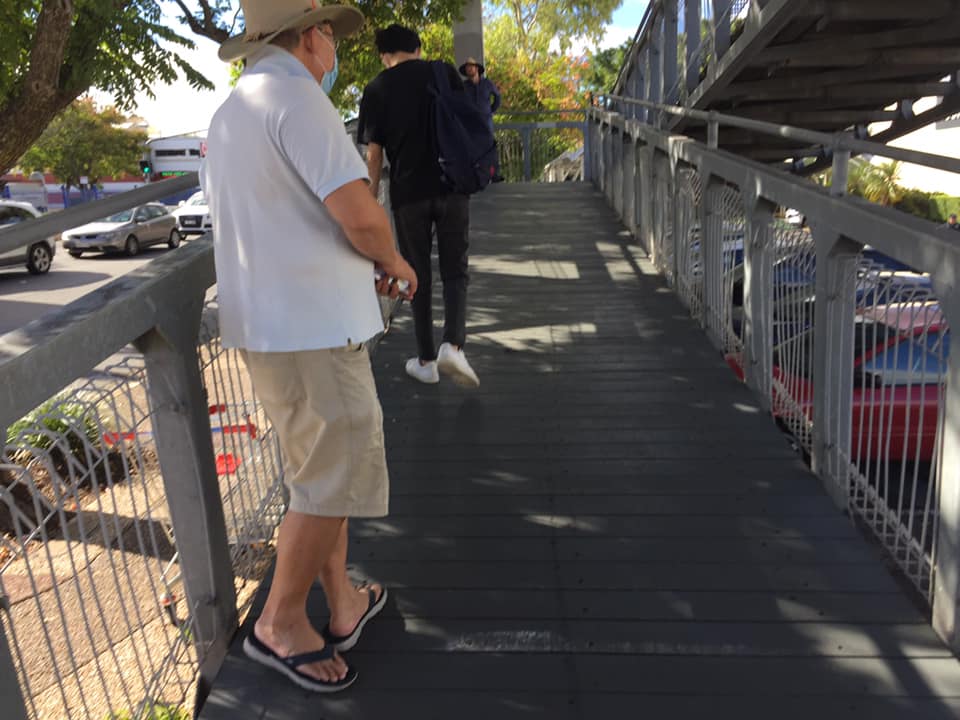