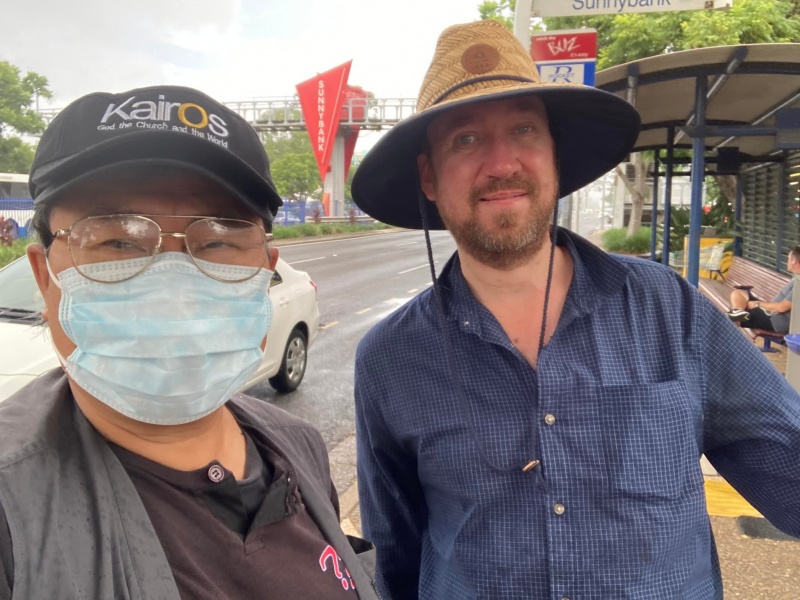 Today I teamed up with Gary who volunteered to resume our regular Street Ministry at Sunnybank. Actually, he started readily yesterday to put up signs to attract people’s attention around his home as there were congestion everywhere because of long queue for Covid-19 testing amidst the outbreak of Omicron in Qld.

Today, there was apparent less human flow at the Sunny Plaza side bus stop that used to be full of people. But it was good enough for me and Gary to handle one after the others with intermittent rejection cases. Recap below is Battle Log of Hung. And thanks be to Gary taking many photo for me while I was sharing the gospel.

1. First, I approached a Thai lady who claimed to have received our tract, but when I asked if she had read it at home then she said she did not as she is a pious Buddhist thus not felt right to read tract of other religion. I quickly endorsed that Buddhism and many other religions are good but only good at teaching people to be a good man. None of them address the issue of sin like Christianity. Sin must be punished and Jesus is the only hope for sinners including all the Good Persons, to have taken over the punishment of our sin as such we are deemed clean and right for reconnecting with God to let Him start the life. transformation work in us through the work of the Holy Spirit. Her bus arrived and she had to go but showed great appreciation for my clarification and explanation of the issue of salvation.

2. Then I approached a Muslim lady with a cross breed son who was a bit sceptical in the beginning but turned friendly to hear the gospel. Yet I did not have enough time to share but just left her with the conclusion that no one can go to heaven unless you are perfect.

3. Oliver is an ABC with parents from China. He listened patiently for my gospel but disclose he is readily a Christian. When I tested for his assurance of salvation and it was astonishingly 100% despite, he does not attend church. So, the good biblical teaching must be from his parents yet they also have stop attending church. So, it was a mystery about the real spiritual status of this Christian family.

4. Another Chinese look young man initially rejected both Gary and me. But, after a short while I tried to have casual chat with him for ice breaking, then our flood gate of conversation was opened to allow me to share my testimony first then the gospel how I was saved by grace through faith in Jesus. He actually is a Vietnamese having lived in Australia for 8 years and is now an Aussie citizen. His attitude changed from indifferent to deeply drawn to the life changing God. This obviously was the work of God.

5. Then I caught up with possibly another Vietnamese lady but the bud just arrived when I was about the start out gospel conversation. She anyway happily took a tract and promised to read at home. I pray that she will not put it aside with the same thought that she is a Buddhism girl as such Christianity is not right for her.

6. Cooper an elderly Samoan lady who quickly declared she is a Christian. I then checked her assurance of salvation which was not quite correct claiming she will go to heaven by complying with the ten commandment. So her faith was built on work rather than grace through faith in Christ. After clarification, she was glad to find out and understand that her basis of salvation is completely dependent on Jesus.

7. Liz a young UQ student from Ching Xin, China重慶 who was rejective initially，最初拒絕，but later after ice breaking chat that I identified with her home town that I once went there for earthquake relief in 2018, she turned very friendly right away and let me share my life testimony as well as the gospel which finally she admits she need to explore and ponder on the implication to her life.

8. Li 李，another young UQ student from Shanghai China.上海姑娘. Again, I identified with her birth place that I once was the pioneer visitor from Hong Kong almost 50 years ago. She was drawn into my life with the presence and guidance of God. So She left as another happy girl readily with the seed of Gospel sowed in her heart.

9. Then I turned around to speak with another girl from main land China. I was not aware of her boyfriend initially while I had very good and interactive conversation with her. Thanks God that only after I finished sharing that her boyfriend reacted irrationally, grasped the tract I gave to the girl from her hand and rudely thrown them into the garbage bin 。The girl was embarrassed for what her boy friend had done but remain polite to le t me wrap up our conversation with a blessing for her the humble and willing listener.

10. Finally, a Chines man who had just taken an English tract from Gary but was OK to chat with me about the tract. Yet the bus came to cut off this conversation, so just pray the tract will do the job 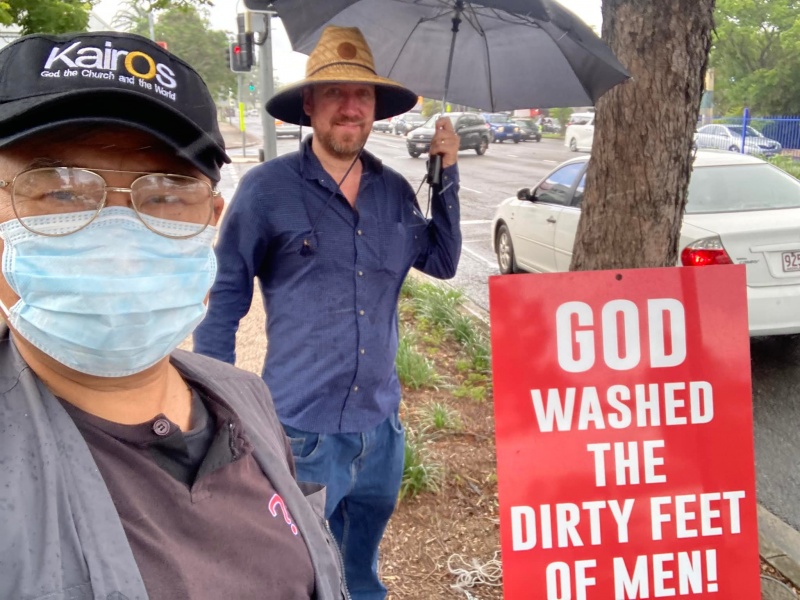 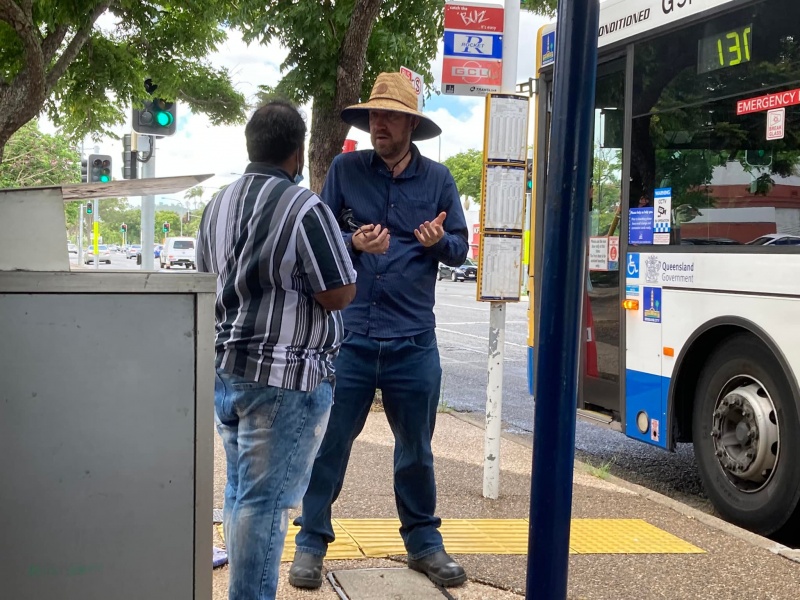 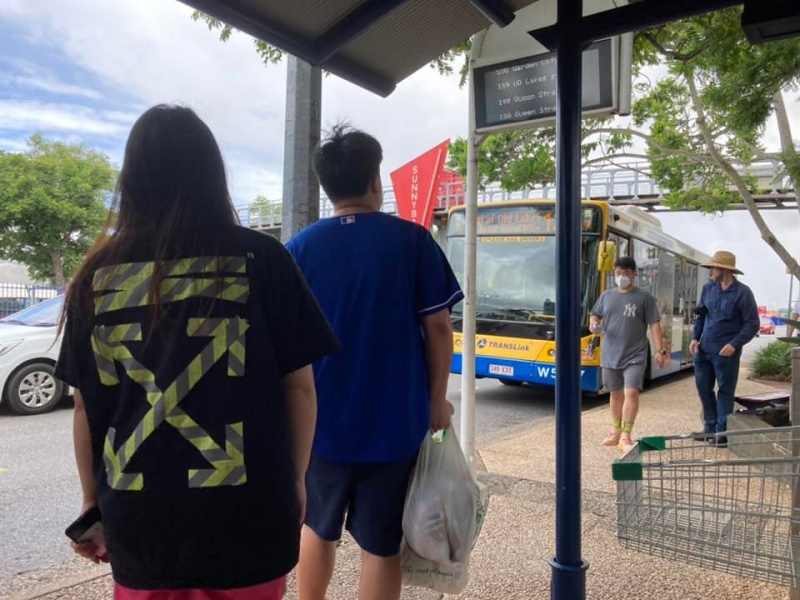 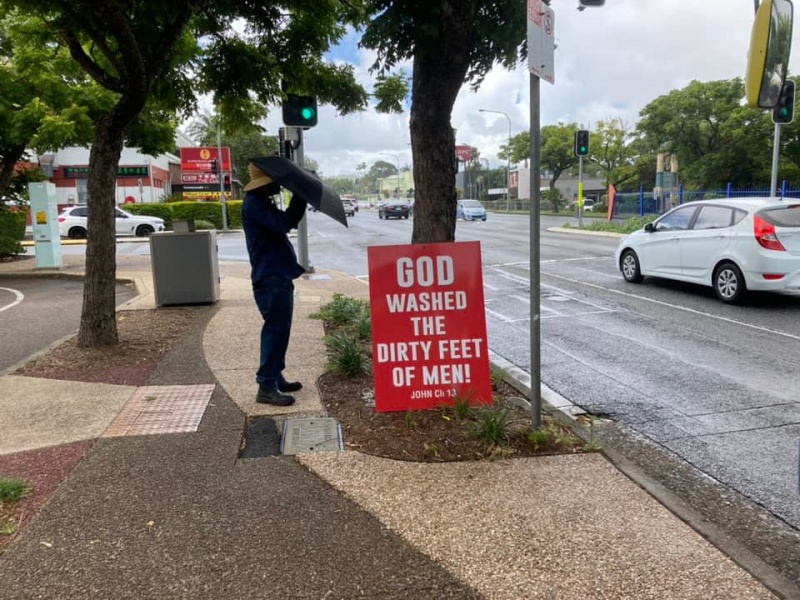