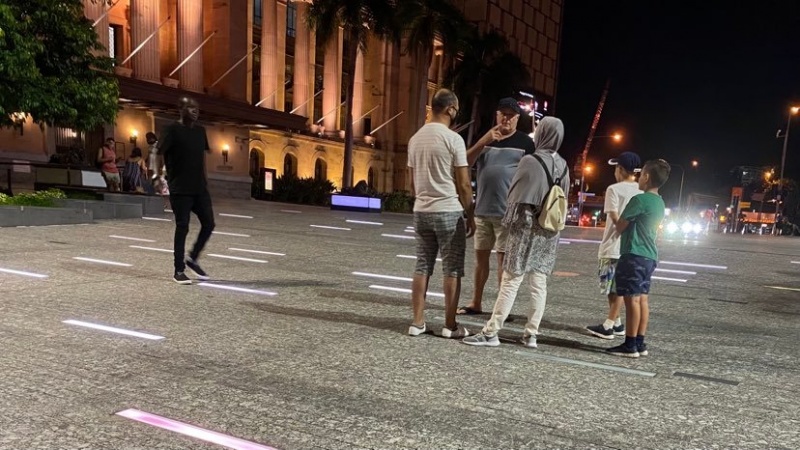 On Saturday, the team got to share the gospel in Brisbane city, encountering all kinds of different people.

One stand out conversation was with two young guys - Zane who was Mormon and Darcy who was Catholic.

Zane started off by telling me about the Mormon idea of 3 levels of heaven. I avoided that topic and instead showed them through God's law that we have sinned and deserve hell. But Zane the Mormon was adamant that good works paid for bad works.

So I asked if a criminal did 5 crimes and then did 10 good things, would the police ignore their crimes? The Catholic guy was getting it, but the Mormon didn't want to budge. Even when going through the gospel, Darcy the Catholic was like, "I will believe in what Christ has done for me!" while Zane the Mormon dug his heels in saying, "I will never change my beliefs."

So I said, "Think of Islam, Buddhism, and every other religion besides Christianity, they teach doing good fixes bad actions, but we've seen how that doesn't work. So if a religion teaches that, they are wrong."

Both Darcy the Catholic and Zane the Mormon (surprisingly) agreed. And Zane said, "But Mormonism is Christianity."

I then said, "They are many churches around, but if a church teaches that good works paid for bad works, they are really aligning themselves with Islam and every false religion, rather than Christianity."

At that, the penny seemed to drop for Zane the Mormon, and he realized that if his church is teaching what every false religion teaches, it can't be right. We chatting further and in the end, both actually came to profess to trust in Christ alone for their salvation.

All glory to God!! Please pray for them both. We meet each Saturday and Sunday nights in King George Square for evangelism, join if you can.