Today Essex OP513 team visited a town called Harlow.  Historically Harlow has had a rough reputation with approximate rates of 10% unemployment along with 30% of its dwellings being council housing.  I have often thought about preaching up there because low socio-economic communities can be impacted greatly by the Gospel.  We found the shopping precinct and was met by Chuck Bosio.  We prayed and I preached first.  People listened and tracks were taken. 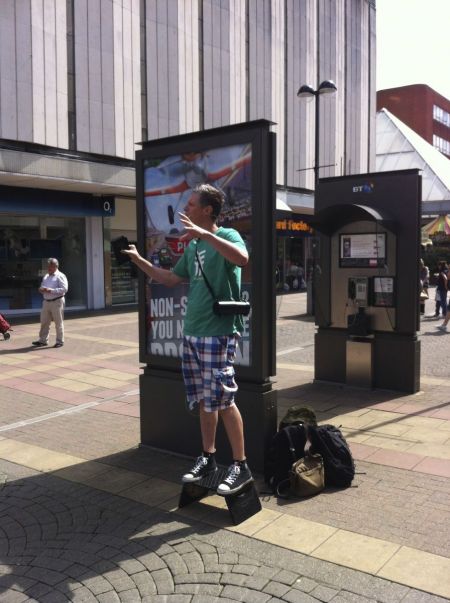 After my address a gentleman asked what my stance was on homosexuality.  So I read Him 1 Cor 6:9 and Rom 1, he then said it was a refreshing to hear a person stand up and endorse the Biblical view, because he was a Christian who has had to leave a church which has begun to embrace homosexual conduct as permissible.  Chuck preached while Josh and I handed out tracts. 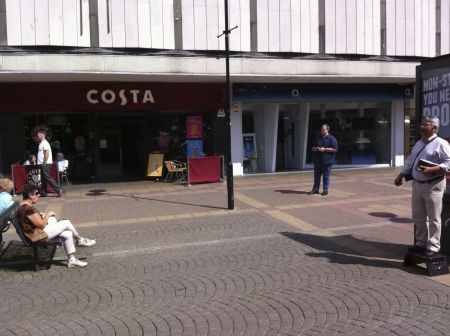 Then Josh preached and began to get into conversations with few different gentlemen.  Slowly the crowd built up until there were quite a number of people looking and listening.  The crowd did get a bit raucous at times with various individuals screaming or being unreasonable to chat with.

Community Officers and Police arrived but none of them approached us or told us to stop.  In fact a young girl in the crowd screamed out "Jesus is a pedophile" and Josh replied with "that is racial and religious hate speech".  The Police in the crowd quickly pulled the girl aside and rebuked her for saying such blasphemy!  It brought to mind the words of Jesus in Mark 9.40 "For the one who is not against us is for us"  while perhaps my context is not accurate I was still praising God that the cops actually defended our cause!! 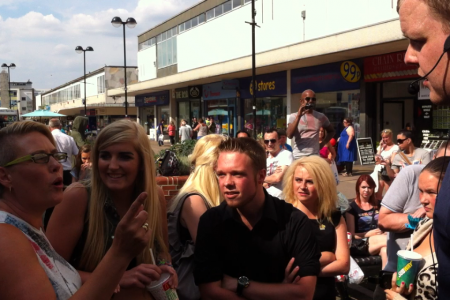 The crowd eventually dissipated and we finished up only to be approached by two Harlow council officers which began to give us grief.  We debated with them about the right to preach whenever and wherever we wished on public land and they got very frustrated with us.  I think a further follow up by our lawyers may be required.  Over all the day was a success with the Gospel preached accurately and boldly.  SDG

Todays outreach in Romford high St consisted of Josh, Rob, Chuck and Myself.  We set up out of the way of pedestrians and prayed that our message would be accurate and God would save sinners for His Glory!!  I preached from Mark 7 on what defiles a person during which it rained a little on and off.  Thankfully Josh had his waterproof Bible so my paper Bible did not get wet!!  Josh proceeded to preach after me and as usual had much more of a reaction from the pedestrians with a "lady" screaming out that we needed to stop preaching etc. 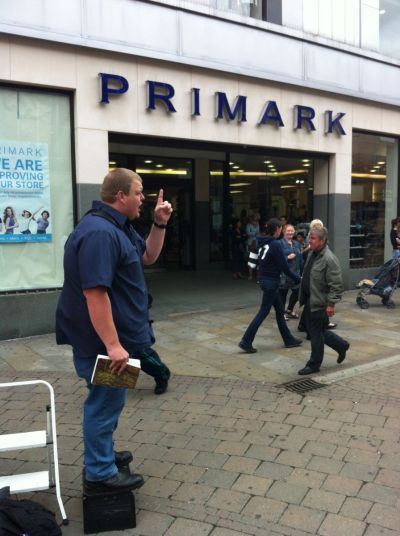 After this episode, two members of Barclays bank came out and abused Josh and told Him to stop.  Josh in turn proceeded to twitter on #barclays and commented on their staffs "christophobic" attitudes.  This got an immediate response from Barclays on twitter and said they would investigate. 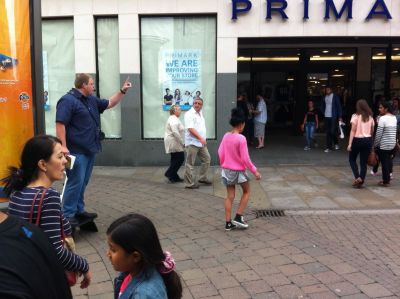 Rob preached next, during which the police arrived and went and had a meeting with the Barclays staff regarding us.  The police chatted with the staff and promptly left the scene without even talking to us.  My best guess is that they have a "heads up" about the "Tony Miano Arrest"  and all the controversy it has started in the UK and are unwilling to stop Christian preachers till it has been resolved. 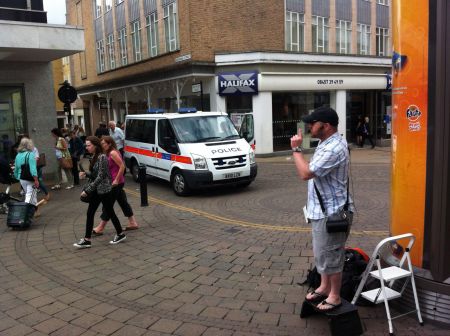 Chuck preached after Rob and I preached once more after him. 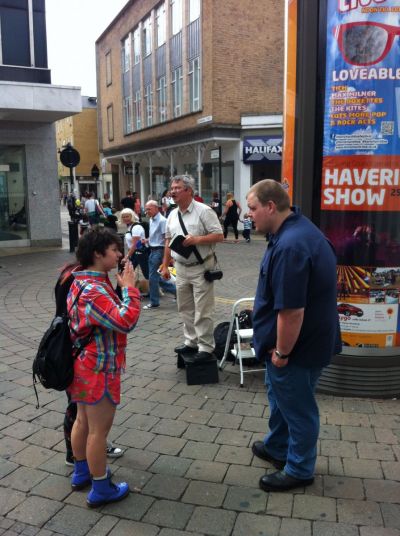 Chuck preaches and Josh talks to two girls about Jesus.

During my second address an accident had occurred in the neighboring Primark store which caused the emergency rescue teams to arrive.  This in turn brought many hundreds more people into the area whilst I was preaching and a whole lot more people got to hear the Gospel!! 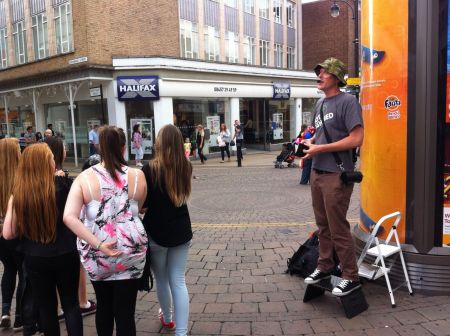 During this time a number of people told me to "shut up" but I reminded them that I had freedom of speech in this great nation because of the liberties instilled by a Judeo Christian Ethic! 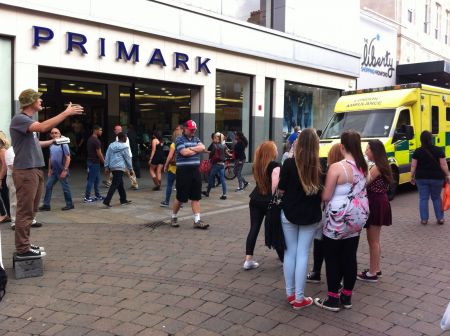 There were also many tracts handed out when the crowds came for a gawk so we praise God that He can turn bad events into glorious opportunities to share His Gospel!!  SDG

This Friday, during a conversation with two young adults, it appears God was working on their hearts convicting them of their sin, so one asked, "How can my sins be forgiven?"

Listen to how it went:

To the one who is able to keep you from stumbling!

Very often on the streets we come across people who call themselves Christian, but in fact have no understanding of the gospel at all. Instead of holding to the essential doctrine of justification by faith alone, they hold to justification by being a good person.

This Saturday night we encountered people like that, and so we had the privilege of going through the law of God with them to bring the knowledge of sin, then warn them about the coming Judgement and about being under God's wrath. Then we were able to share the great news of the cross with them, and that if they trust in Christ's death alone for their forgiveness and repent, they will be forgiven.

Watch the following video from the night:

Please keep us in your prayers. And if you live nearby, please get in contact with us, we would love to have you join us on the streets.

To the one who saves to the uttermost!

Todays outreach was held in Chelmsford town centre.  Myself, Josh, Rob and Chuck gathered at McDonalds and made our way up the high st.  We set up under a large tree that provided shade from the sun and prayed.  While this was happening Josh cornered some mormons and began to ask difficult questions about the veracity of the LDS church.

Josh and the Mormons

I preached from Mark 7 about what defiles a person. 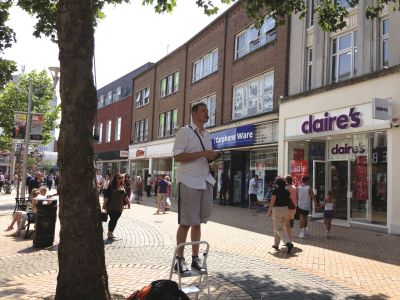 Josh preached after me, then Rob and then Chuck. 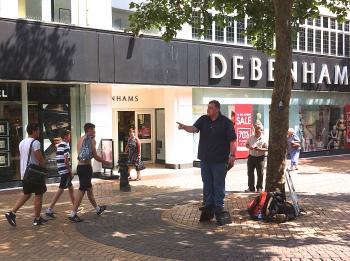 All of us were distributing tracts during the event as well.  Rob had a number of conversations with young people, as did I, plus I encountered two quite elderly people who listened to me about the Gospel.  I find older people are much more self righteous than the youth, but these two where quite willing to listen, Praise God!!

An Anglican priest came over to us and was not happy about us "condemning" people by preaching Gods Law prior to the Gospel.  Josh and Rob had a quite an in depth conversation with him which ended up with the priest explaining that he was gay and that his bishop had no problem with that orientation. Needless to say the man was not a Christian and this was explained in no uncertain terms.

An number of local Christians were greatly encouraged by our presence and one gentlemen generously went and purchased us a bottle of coke each.  This was well received since the temperature was about 28 degrees celsius (normal for Australia but not Britain!) 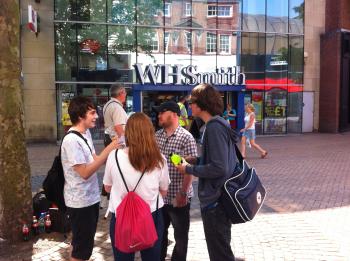 After a few hours we had a small break for lunch, then we reconvened further down the high st and I preached again from Matt 19 in regards to how God designed marriage.  Not long after I had started, a homosexual man began to heckle.  Chuck and Josh began to talk with him only to find that he was not willing to have an honest dialogue.  The whole afternoon was a excellent and the Gospel was proclaimed! SDG.

Today the OP513 team met in Romford.  I was joined by Josh Williamson, Rob Hughes, James Ntensibe and Chuck Bosio.  Myself, Josh, Rob and Chuck preached at differing times, one of the wonderful things about preaching the Gospel here, is that we can use amplification!  Lots of tracts went out and we proclaimed Gods truths as bold and as accurately as we could.  Rob had a very good conversation with a young man who was sitting on a public bench.  I preached from Matthew 19 concerning the definition of marriage as it is undergoing a lot of revision in the House of Lords here in the UK.  Overall it was a great afternoon of preaching the Goodnews!! SDG. 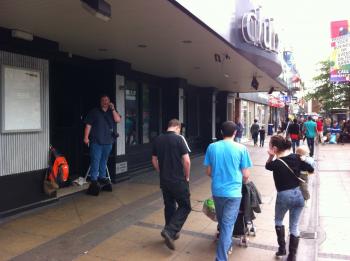 Chuck chatting with a Muslim 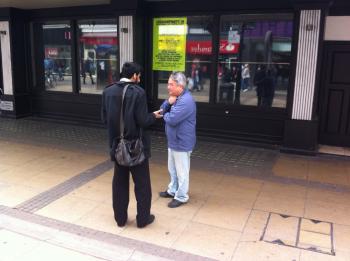 Rob having a great conversation with a young man 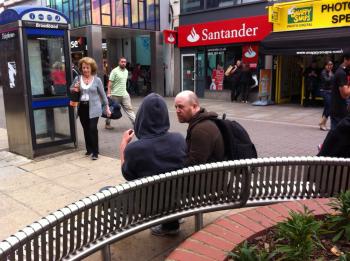 On Saturday night, one person we chatted called himself a Satanist, and just believed in living his life the way he wanted.

See the following video battle log report from the night:

On Saturday night, one lady raised the objection that God would be unjust to send people to Hell. But the problem with that objection is that, by what standard is it unjust? Your own personal opinion about what is just and unjust? How does that have any bearing upon God?

Watch the following video battle log from the night below:

To the One is who is like no other!

Wow, did I just hear that? The leader of the Brisbane atheists group makes a very clear statement endorsing the Christian Bible and encourages everyone to read it. Watch how it all took place.

To the one who never changes!

This Friday, one young lady was presented with the choice of forgiveness through Christ or doing what her boyfriend wants, and that is to reject Christ. Listen to how the conversation panned out.

To the one who made the world and everything in it!