The Bible says everyone already knows that God exists (Romans 1), but people have sadly deceived themselves by denying him. Listen to this clip from Saturday night's outreach of how someone rejects his atheism and comes back to the realisation that God exists.

To the one whom every knee will bow!

To be the glory for another great evening sharing the gospel. Take a listen in the video report below to a very interesting encounter I had with a guy named Mitch. He spoke about how he had no idea how to have his sins forgiven.

For the glory of the Lord!

It was another encouraging night in Brisbane. As you'll see in the video below, Kevin was overjoyed to see God work in one lady's heart. All praise be to God!

To the one who is always faithful!

People bring up all sorts of reasons why they think God should let them into Heaven. This Friday night one lady thought that because she had not sinned since January, she deserved to go to Heaven.

Hear more about it below in the following short video:

To the Lord of all! 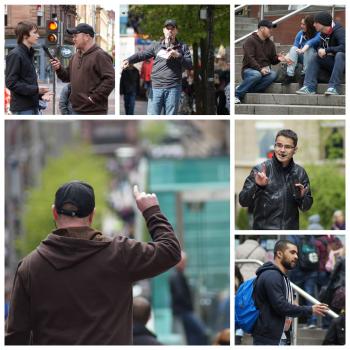 For the next 11 days I will be in Glasgow, Scotland, joining up with Jeremiah Cry Ministries — a ministry from the States. We will be sharing the gospel through open-air preaching and one-to-one witnessing.

The picture to the left sums up my first day. Our team was small in size but more have now arrived. All four of us preached yesterday, with some of us preaching twice. The Lord used brother Paul to bring in a large crowd with many hecklers; he preached for at least an hour. I preached after him with more hecklers, and then we got into some great one-to-ones. It was quite incredible to see the absurdity behind their arguments. But towards the end there were a few who really did begin to see how their worldview does not hold wait, and that what they believe fails to make sense of this world. This opened the door for the gospel!

During one particular conversation I spoke with a relativist about truth. I asked him to define it. The following is not made up:

Relativist chap: “Truth is what we come to learn over time. We once believed the world was flat, now we know the world is round.”

Rob: “Right. So before we came to see that the world is round, was the world round?”

Here's the thing: even if we didn't exist, truth would still exist. And it's absolute. Truth is that which conforms to the mind of God (see John 17:17). So why does the fool embrace absurdity? Because he has a worldview to protect? We must expose in the unbeliever his suppression of the truth (see Romans 1:18-22).

Although it was still only the first day, we did have an encounter with the Police. They were very friendly and cordial, but did warn us 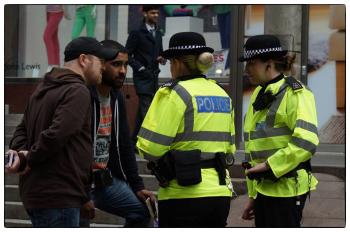 against unrest from people who may disagree with the Christian message (we discovered that later in the day, but we praise God that His Word went forth). Some people had apparently complained as we were preaching, and so they came to tell us that we ought to be careful what we say. We defended our right to speak and to share the gospel and they did agree to that. They also took our details and and asked us about the mission, i.e. where we would be and what we would be doing. The reason for this was not to stop us, but rather to let their colleagues know about us and what we would be doing.

Do pray for the team:

1. Please pray the Lord would give the team boldness, wisdom, patience, understanding and a deep love for the people.

2. Please pray that it would please the Lord to grant us favour with the authorities, as well as protection on the street.

3. Please pray the Lord would bind the team together, that there would be unity, and that He would protect us from the devil's schemes.

4. Please pray that God would raise up other Christians who would build upon the foundation that is laid through our witness.

5. Please pray that God's Word would do a mighty and powerful work in those who listen; that they would be saved.

The Essex team had a blessed day of ministry on Saturday 11th May in Romford. The gospel was proclaimed by Rob, Andrew and Chuck in the open-air, with many hearing the truth of God's Word. There were also some very encouraging one-to-one conversations, with two people taking a Bible. Although there was much indifference, we praise God that the gospel went forth. To God alone be the glory!

Watch the following 7 minute video evangelism report from the day:

Click here to listen to the open-air message from Rob Hughes.

All praise to the name of the Lord!

It is amazing seeing the power of God work on a person's heart, and this Saturday we saw that in one particular conversation. The person was very hard-hearted from the start, but as one of the team members responded to his objections, and shared the gospel with him, we could see God slowly soften his heart.

Watch the following 5 minute video evangelism report from the night:

To the one who can save to the uttermost!

Sometimes on the streets you hear bad arguments, but one presented tonight maybe takes the cake. One atheist was asserting that because he cannot see God, therefore God must not exist.

Watch the following 4 minute video evangelism report from the night:

To the one who is always faithful!

Slavery in the Bible is something very often brought up by skeptics. Is the Bible's mentioning of slavery inconsistent with the rest of the Bible? This was one of the questions raised during this week's outreach.

To the God who made the world and everything in it!

"How could God die? How could God be in a human form? What is the Trinity?" These were some of the questions that were raised by a Muslim from Oman that Justin was speaking with at the Gold Coast.

Salvation belongs to the Lord!